Tonight a genealogy discussion group I belong to had a “Lock-In”.  About 50 of us were locked in a local public library for 6 hours this evening to do research.  It was my first lock-in so I wasn’t quite sure what to expect.

The night was long, but enjoyable.  Several people, including me, volunteered as “experts”.  I was able to help a couple people with their research, which was great!
People were able to collaborate on research, share ideas and use library resources.
I decided that I would take the evening scanning many of my random notes into Evernote in my effort to “go paperless”. I got everything I took scanned and ready to index much quicker than I thought.
I scanned all the random notes in these notebooks using the CamScanner app on my iPhone. It worked great! 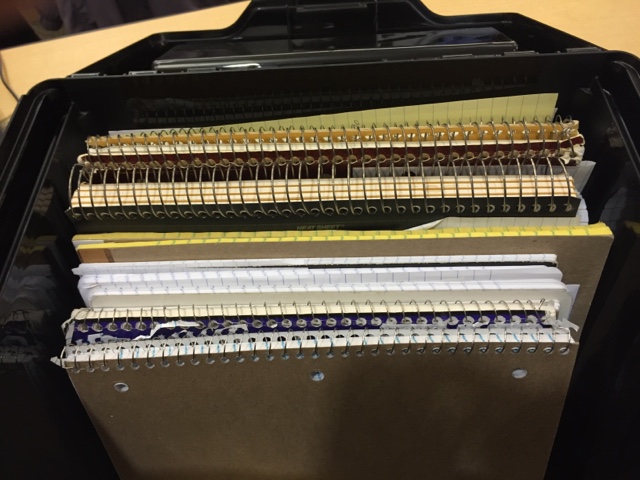 I very much look forward to the next lock-in event. 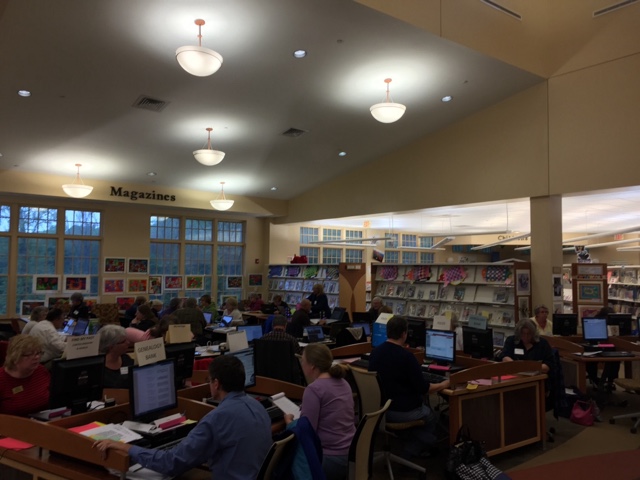 A very cool video showed up on my Facebook timeline this morning.

A photographer and animator in Moscow, Russia has taken pictures from several U.S. cities in the 1900s and animated them.

And if you are interested, visit Alexey’s page on Behance to see other projects by Alexey.

And if you have missed previous episodes, catch up at PBS – Finding Your Roots Episodes or on the PBS app.

Several years ago I was helping someone with research on one of their ancestors.  He was was looking for an ancestor that had a fairly common name in a big city.  It was difficult to track which guy was “the guy” due to similar names, ages, spouse names and inconsistent birth/marriage dates.

At the time, one of the things we were doing was looking at signatures on different documents and comparing them to try and find the correct ancestor.  We had a few that were vaguely similar but enough differences to assume they weren’t the correct person.

I am no expert in handwriting analysis and I understand that how someone signs their name can change over time but I was pretty confident at the time that we could rule certain samples out.

But a co-worker said something to me today that has me rethinking our analysis back then.
I had to update some forms and my co-worker had copies of the forms I signed five years ago.  I was also required to provide my drivers license (which I renewed and signed two years ago).
After I signed the forms and handed over my license the co-worker said, “are you sure these old signatures are yours?”.  Of course I was sure…I signed them.  Then it hit me.

Last June I was hiking, slipped on a rock in a stream, fell and broke the middle finger on my right hand.  The x-rays revealed a benign tumor in that finger which required surgery once the break healed.  I spent all of June, July and August with a splint that immobilized the last 3 fingers of my right hand.  Then came 4 months of therapy to try and restore the range of motion of my fingers (which I still do not have).  I still cannot make a fist or hold a pen the way I did before the fall.  Therefore, I am not able to sign my name the way I did before, I am not sure I ever will.

In 100 years when someone is researching me, if they find documents with my signature, and they compare them, I am sure it will be confused.

By the way, in the times since the original signature evaluation of my friend’s ancestor, he has been able to find additional information that allowed him to find the right guy.  One of the signatures we had ruled out did belong to him…three of them did not.

Last night about a dozen family members on my Dad’s side got together for dinner.  My Uncle John brought some old letters with him.  These letters were written in the 1970s when he lived in Florida.  It was so fun to read and pass around, especially since most of them were written by me and my cousins when we were kids.
Letter writing, obviously, has declined due to the internet, email and Facebook.  I didn’t realize how much I miss letters until we sat around that table and read letters last night.  Yes, you can let your kids type emails, and you can print them out and pass them around the table too.  But to see the handwriting it seems so much more personal.  I hope he shares more letters in the future.
I only took pictures of the 2 letters he brought that were written by me or my immediate family.

The first letter was written in November of 1972 by my mother.  Also included were “snip-its” from my sister and I.

You can tell it was the 1970s because my mother is inquiring if a fondue pot would be a good wedding gift for my uncle and his wife.
First up is my sister, she was 5 and obviously just learning to write.

On the next page, I put in my 2 cents. I was 7.
I don’t have any return letters so I don’t know if he answered the question, I am sure he did.  I do know that we did not go visit them in Florida as I am sure that it was cost prohibitive for a family of 4 supported by a surveyor.
The next letter was written solo by me in November of 1974.  Apparently my family only wrote letters in November.  Judging by the address in the upper left and my formal closing, I assume it was written around the time we were learning letter writing in school.
It seems silly to be overjoyed by these letters but it thrills me that my uncle saved them after all these years.  It would be very easy to toss them away.  I am so glad he didn’t.

I thought I would take a minute to wish everyone a Merry Christmas.  I hope everyone takes the chance to take a break from looking up dead relatives and spend time with living relatives and friends.

In my family, my mother used to make Christmas dinner, as she did for every other holiday during the year.  As far as the menu, it was not set in stone, there was variety every year.
About 10 years ago I took over the “chore” of making Christmas dinner.  I don’t remember exactly why the switch was made, but now feeding the family on Christmas day is in my hands and I enjoy it.
The first year we had filet wrapped in bacon.  It was good but I don’t remember what accompanied the steak.
The second year I decided to do a prime rib.  It was a big hit and now my family looks forward to prime rib on Christmas.  The sides change every year, with the exception of creamed spinach.  I think if I stopped serving creamed spinach I would be disowned!
With a new little great nephew this year, I hope that he looks back years from now remembering Christmas dinner prime rib at Aunt Barb’s house.  Although this year he will be enjoying a bottle and Stage 1 baby food.

In the evening my sister and I will head to my Aunt Mary’s house.  Aunt Mary is my Dad’s sister and she hosts a family gathering every Christmas night.  She has been doing this since the late 1970s when she took the tradition over after the death of my grandmother.  Ever since I can remember the Henrys gathered on Christmas night to eat and just spend time.  It is the only time during the year that I see some relatives on that side.
As a small child I went because, well, you don’t really have much of a choice at that age.
In my 20s and early 30s I didn’t go every year.  I exercised my independence I guess.
After the death of my father in 2004 I have made an effort to attend every year (as long as the weather cooperates).  I now appreciate the opportunity to see these loved ones, if only for a few hours a year.

Here is me with one of my favorite Christmas presents as a child (the bowling set, NOT THE DRESS!) in 1967.

For those who do not celebrate Christmas, I wish you a great end of 2014.

As mentioned in my previous post I’m a…Viking?, I was a bit confused when I got my AncestryDNA results.
Because of this, I decided to have my mother and my father’s brother take the test to try to “separate” the maternal and paternal ethnicity.
My mother took her test, I sent it back and within 2 weeks I received the results last Saturday.  It was a busy weekend and I really didn’t have the chance to look at her results in any detail.

Our results are as follows:

One of the first things that caught my eye is the Italy/Greece percentage.  Through my research, I expect all of this region to come from my maternal line.  So, to see my mother has 20% and I have more at 24% is a little surprising.
The rest is about what I expected I guess, my research has supported much of her result, a lot more diversity.

My uncle took the test last Saturday, the same day I got my mother’s result.  So, I’ve mailed it back, activated his test and am now in the unbearable waiting stage.  My paternal line was the most confusing since I thought there would be a lot more of the Europe West region in my results.

Admittedly, I need to read a little more about DNA in general.  I know that DNA isn’t the only answer and that as more people get tested the results will be adjusted, but I’m fascinated by the results I’ve gotten so far.  I’m so interested in seeing my uncle’s results!